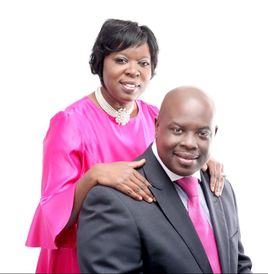 ​What kind of a man will totally surrender and yield his life to the divine, omnipotent God?

What kind of a man understands the power of supernatural vision and not fleshly ego?

What kind of a man has the faith to step out without regard for the ridicule or naysayers lurking?

This kind of a man knows that there are no limits in his God, Who created the universe and created
him for a unique and specific purpose to fulfill on the earth! This kind of a man is not afraid to
step out into the deep ocean of POSSIBILITIES because he knows that he serves an UNLIMITED GOD!

This kind of a man does not see the world as a humongous canvas that cannot be touched, but
understands that God’s hand created the whole world and that same God reigns on the inside of him.

This kind of a man yields to God’s voice for every direction of his life!

God foreknew Andre Finkley before the foundation of the world and planned his life to be one of
purpose. During his early years, he attended Nazarene Missionary Baptist Church, in Mullins, South
Carolina. At the age of ten, his family moved to New Britain, Connecticut, where he attended New
Hope Church of God in Christ under the pastorate of the late Bishop Millner.

In 1999, Pastor Finkley relocated to Winston-Salem, North Carolina, and there he received salvation
and joined The Uncompromising Word Fellowship under the pastorate of Pastor Bobbie A. Jones. He was
later licensed and ordained under this ministry and served faithfully on the ministerial staff and
the outreach department. This anointed man of God had to stand the tests so that he could emerge as
a polished vessel that could be used by God.

Like Moses, Pastor Finkley has been given a huge assignment as the visionary and leader of Global
Restoration Center to be a miracle in the lives of the hurting and broken hearted. He is to be the
hands and voice of God in the wilderness. He is to be bold and courageous like David, and strong
like Solomon, his son!

I Chronicles 28:20
And David said to Solomon his son, Be strong and of good courage, and do it:
fear not, nor be dismayed: for the LORD God, even my God, will be with thee; he will not fail thee,
nor forsake thee, until thou hast finished all the work
for the service of the house of the LORD.

In 2006, Pastor Finkley birthed Temple of True Deliverance Ministries, Inc. In 2014, after much prayer, the
name of the ministry was changed to Global Restoration Center. God knew that the assignment that He
gave to Pastor Finkley would be so large that he would need a strong, anointed helpmeet. He sent it
in the person of Evangelist Alisa Finkley. She has been nurtured to be a nurturer and to bring
healing to the sick, to speak life into adverse situations, to be a problem solver, and to help
carry the assignment that God gave to her husband. The two shall become one. Like the proverb
woman, Evangelist Finkley is strong and possesses every character that it takes to conquer giants.

In 2009, Pastor Finkley received a Degree in Biblical Studies from Vintage Bible College. He has
pioneered several different ministries to meet the needs of others.
Andre Finkley Ministries, Christian Focus Newsletter, A Word of Deliverance Radio Broadcast,
the Honor's Circle and My Brother’s Keeper Men’s Ministry are just a few. Pastor Finkley has written
a book entitled Churches of Asia Minor and the much awaited book Prepared To Lead Leadership.
​Pastor Finkley has traveled to Haiti as a Missionary to bring the gospel to the hurting hearts of that nation.

With his loving and anointed wife by his side, Pastor and Evangelist Finkley have begun their
journey to deliver a word of deliverance to the world. As they launch into deep rivers to fulfill
their God-given assignments, they go forth with the wisdom of Solomon, the courage of Joseph, the
perseverance of David, and the power and confidence in an almighty, unfailing God! The righteous is
bold as a lion just as we see Pastor and Evangelist Finkley going into the byways and the hedges
sharing the “Good News” of a healing and forgiving Savior to a lost and dying generation.

Pastor Finkley’s desire is to usher in an apostolic move of God that reaches across color and
cultural lines, bringing men and women into the saving knowledge of Jesus Christ. This vision has
been one that has begun to come to pass. His faith and determination to stand has yielded the
evidence bearing fruits of healing, deliverance, salvation, restored marriages and relationships.

Pastor A.D. Finkley continues to teach and reach the lost, as well as equip the saints for the
challenges ahead by giving them the tools they need to not only live the life that God has provided
for them, but to do so in a way that glorifies God!

1 Corinthians 2:9
But as it is written, Eye hath not seen, nor ear heard, neither have entered into the heart of man,
the things which God hath prepared for them that love him.